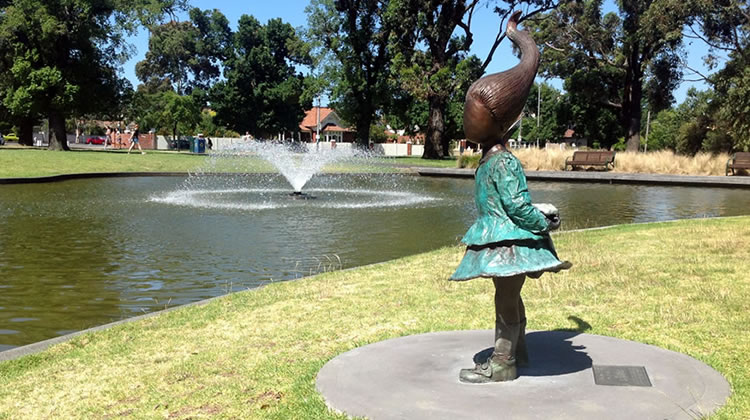 Within Three Worlds comprises a bronze figure of a young girl looking out over a pond, in which three vessels sit. The figure represents Anna as a child, but is an ‘every child’ that embodies the innocence of youth and possibilities of the future.

Angela Jane Esdaile was born in Melbourne at St Andrews Hospital on February 19, 1969 and was 24 years old when she died of acute asthma in December 1993, while walking with friends along Rye beach. She was a tireless community worker, who made a significant contribution to the community, particularly with regards to children and young adults. She organised her first community project when she was just 8 years old. Following Angela’s death, her family donated funds towards a memorial artwork. In 1994, local artist Loretta Quinn was commissioned to undertake this work, which would commemorate Angela’s contribution to the community, as well as those of all childcare workers.

Exploring my own city: Westgate Park by The Resident Judge of Port Phillip I hate driving over the Westgate Bridge. It's a real white-knuckle … END_OF_DOCUMENT_TOKEN_TO_BE_REPLACED

Built in 1900 to serve the local communities that lived in the hills, carrying anything from passengers to timber, livestock, potatoes and plants, the Railway is now a major tourist attraction that … END_OF_DOCUMENT_TOKEN_TO_BE_REPLACED