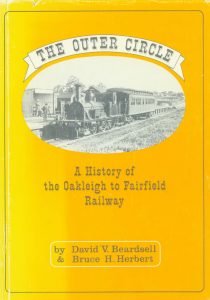 The Outer Circle was built during the 1880’s to bring goods trains into Melbourne from Gippsland.

The railway never ran as one entire service from Oakleigh to the city withFairfield to Deepdene running for 26 months.

Today, the Outer Circle Railway is the Anniversary Bicycle Trail but it began as an ambitious rail line connecting the outer eastern suburbs of Melbourne to the city.

Pictures from The Outer Circle: A History of the Oakleigh to Fairfield Railway by David V. Beardsell and Bruce H. Herbet.  No longer in print.

We cannot display this gallery

Exploring my own city: Westgate Park by The Resident Judge of Port Phillip I hate driving over the Westgate Bridge. It's a real white-knuckle … END_OF_DOCUMENT_TOKEN_TO_BE_REPLACED

Built in 1900 to serve the local communities that lived in the hills, carrying anything from passengers to timber, livestock, potatoes and plants, the Railway is now a major tourist attraction that … END_OF_DOCUMENT_TOKEN_TO_BE_REPLACED